The latest Housing Market Report from the National Association of Estate Agents (NAEA) for September shows that buyer demand has risen in the past quarter and is now back to pre-referendum levels. Nationally the number of properties available has dropped slightly – however across the South East, the housing stock available is up 16% compared to the same period in 2015.

At a local level in PE19, our experience of recent market trends tends to echo that of Rightmove Director Miles Shipside:

“While there is still underlying high demand in mass-market sectors, some find that affordability has become over-stretched while others judge that prices have risen beyond their true value. While many properties are still selling, in market sectors where there is now a lot more choice, buyers need enticing by an attractive price or by properties with special finish or appeal. If sellers fail to take this into account, then buyers will choose to buy elsewhere or bide their time”.

The chart below also shows that most regions across England have continued to see property prices increase – with East of England showing the strongest annual growth rates of 7.6% (source:Rightmove). 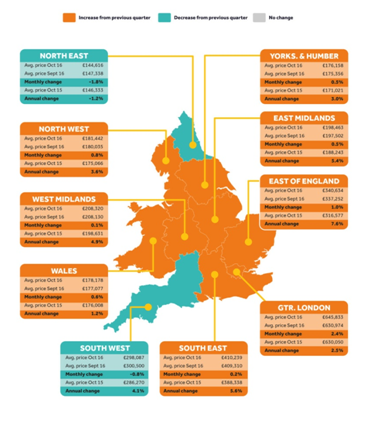 First-time-buyer demand, has however dipped to a new 10-month low. With the raft of measures introduced by the Government over the past 12 months that were intended to support this group, it is clear they are yet to have the required impact.

NAEA members said 23% of property sales were to first-time buyers in September, a decrease of five percentage points from August, and the lowest level seen since November 2015 last year when it was 21%.

Mark Hayward, managing director of the NAEA, said: “This month’s report proves that buyer confidence is growing, which is obviously reassuring, given that we expected uncertainty following Brexit.

“Although supply has dropped marginally, this does not concern us as it’s still higher than the levels we saw between April and July. However, it is worrying that the number of sales being made to first-time buyers have fallen to the lowest number in 10 months.”

Added to this, the Government ‘Help to Buy’ scheme is also due to finish this year, which may add further pressure to those looking to get their foot on the property ladder. At Lovett’s, we eagerly await the Autumn Statement on 23rd November to see how the Government proposes to further assist the first-time-buyer sector.

In the PE19 postcode, we have seen an increase of 27% in property prices over the past 5 years across all property types. The best performers were semi-detached homes (29%) whilst the worst were terraced homes (22%). 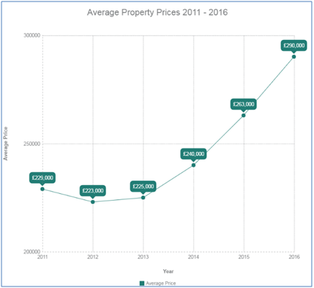 More recently, we have seen a rise of 4.58% over the past 12 months, however this has now started to plateau, as there was a marginal drop of 0.05% in the last quarter across all property types.

The 3% Stamp Duty surcharge on the purchase of buy-to-let properties, holiday homes and other additional properties has generated nearly £700m in additional tax since its inception in April this year – that’s £116m per month!

This surcharge was seen by many as an overt attack on landlords and an attempt to sideline them from competition with first-time buyers. However figures show that this has yet to have the desired effect – but has distorted the market in terms of reducing the level of investment property purchases.

Critics of the 3% surcharge say that it is the tenant paying the price rather than landlords, while the levy also affects parents helping their children on to the housing ladder.

As rents continue to rise and first-time-buyer levels remain low, we believe the critics have a point.

One point that both critics and advocates agree on, is the need to reinvest the proceeds from the tax into the housing market, to make it accessible for all.

"Very good agents to work with, have been dealing with them since 1998 and have always received very good service."
Gulbarg Mann