Since the EU Referendum in June the UK residential sales market has certainly felt a decrease in activity, however this can be attributed in part, to the traditional summer-slowdown seen annually.

Stats from over 90% of the market show the price of properties coming to market has dropped by 1.2% (-£3,602) - in line with the 1.2% average drop over the last six years at this seasonally subdued time of year. This has been felt the most by larger properties, whilst the first time buyer / buy-to-let investors continue to support the 1 and 2 bedroom markets.

The year has certainly been one of two distinct halves. The first six months were incredibly buoyant, with property transactions up 12% on 2015. However this figure is rather skewed by the huge rush to buy investment properties in March, before the increased Stamp Duty tax came in.

As already mentioned, July and August has seen a significant drop-off in buyer enquiries (whilst seller-levels remain high) – however this still remains 4% up on the same period in 2014 (source: Rightmove). At Lovett’s we are expecting a strong recovery throughout Autumn, as stability and growing confidence creeps back into the local PE19 market. 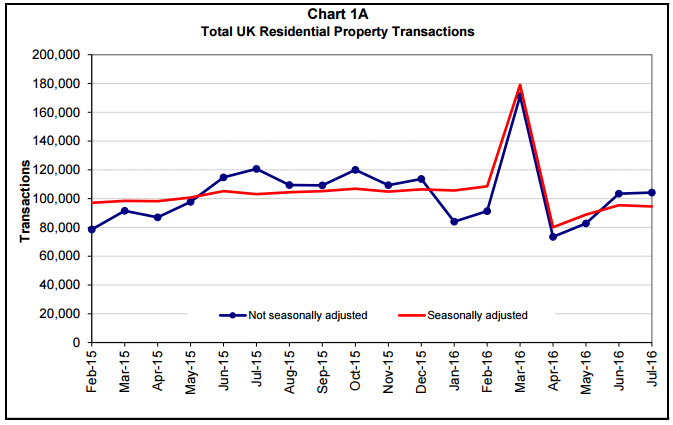 Above: Showing how additional stamp duty tax has skewed property transaction figures in 2016

This optimism is shared by the Council of Mortgage Lenders (CML), as gross mortgage spending remains stable throughout the summer. CML’s chief economist Bob Pannell said: “The Bank of England expects stronger economic headwinds to build as we move into 2017.

“The Term Funding Scheme should boost market sentiment a little, by engineering broader cuts to rates for existing mortgage borrowers than would have been the case.”

Through this fund, the Bank of England will lend up to £100bn to banks to encourage them to pass on the recent interest rate cut to 0.25% to households.

Pannell believes market conditions would become clearer as it moved further away from the “distorting effects of April’s Stamp Duty change”.

At Lovett’s, we’ve seen a strong recovery since the EU referendum, and are confident the local property market in West Cambs will continue its buoyancy, with prices remaining stable for the foreseeable future.

"The staff are so accomodating and easy to communicate with. A lovely letting agent that sorted our transaction smoothly.:)"
Abigail Harding