After a turbulent 2016, we're all hoping that 2017 will bring us some cheer. Here's how we see the property market performing in the coming 12 months..

The graph below shows that the actual supply of new sales listings coming to the market in 2016 compared to previous years. In comparison to 2015, the last 12 month were very similar, with supply starting strongly at the beginning of the year, and tailing off from September onwards.

This mirrors our experiences in PE19 that supply remained fairly constant, however it was actually the number of buyers that really dropped off, particularly leading up to and after the EU Referendum. 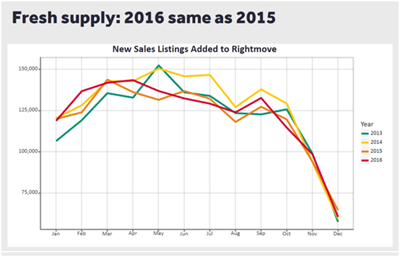 This slide in potential buyers therefore had a knock-on effect on the number of property sales agreed throughout the year. The chart below clearly shows the spike in the first 3 months, courtesy of the change in second-home taxes. Once this legislation came into place purchases slumped significantly, recovering slightly in Autumn before sliding again this Winter. Overall, we saw an annual decrease of 3.3% in sales transactions across the UK. 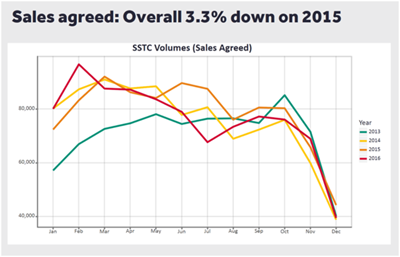 Moving into 2017 we believe that nationally, levels of house price growth will slow due to continued uncertainty in the market, primarily around the triggering of Article 50 – however, contrary to many gloom-mongers, we don’t envisage an overall drop in prices. Demand continues to outstrip supply, and with no immediate sign of this changing, we believe prices will therefore remain buoyant.

On a more local level, we believe the market is still strong. Indeed with the continued dearth of new homes coming onto the market and the popularity of St Neots as a commuter hub to London/Cambridge workers, as well as a good investment area for buy-to-lets, we believe property prices will continue to rise in our region, potentially as much as 6 or 7% annually.

As a business, we witnessed a strong year in lettings in 2016, with both supply and demand booming – which naturally fuelled rent hikes in our area. The chart below reflects this, showing that nationally, new lettings listings were well up on 2015 for the first 10 months of the year. Again, part of this can be attributed to new BTL properties being advertised for let following their purchases, pre-legislation change, in April.

In 2017 we believe will start to feel the squeeze on the supply of new rental properties, as increased government legislation begins to take hold, and lending criteria also tightens. Demand, however, will remain strong, as the owner-occupation still remains out of reach for many. Across the UK, many commentators are predicting rent rises of 2-3%. Closer to home, within PE19 it is likely that rents will plateau in plateau in 2017, such has been the surge in prices over the past 12-18 months. 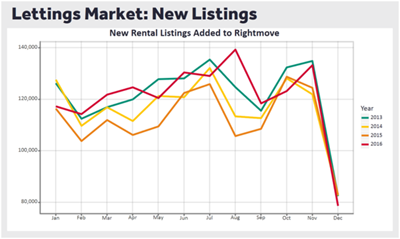 We’re going to see an increasing shift in the way people search for properties online. In 2016 the industry-leading portal Rightmove saw mobile/tablet traffic up a huge 24% on same time the previous year, overtaking desktop PC searches for the first time . This now sits as a 75% / 25% split in favour of mobile searches.

We recognise the importance of this change in the market, and as such have a mobile-responsive website, and are investing further in maximising the quality of our property images in order to show them in the best light possible to potential buyers / tenants.

Over the next 12 months we believe mobile/tablet usage will increase further, as more and more people consolidate their laptop/desktop PC’s usage for work only.

With buy-to -let activity down 30% on Jan 2016 (primarily due to the second home tax), we are likely to continue to see a slowdown in this sector. On top of the second home tax, landlords we are also seeing the start of the withdrawal of tax relief on mortgage interest

Investors are now looking away from London, and are heading north for better yields. While we expect the North East and North West to benefit from this change, we do also expect Cambridgeshire to continue to attract property investors, but at a lower level to those previously seen. Rental yields in PE19 often sit around the 4-6% mark, and therefore offer a much better return to investors than many other traditional routes.

"I've been a landlord for 9 years and always found Lovetts to provide me with good honest advice and excellent all round service keeping me informed and the same can be said for their sales team who have recently sold my property. Highly recommend."
Jean